Portland-Vancouver are debating the replacement of the Interstate 5 bridges crossing the Columbia River. Cost estimates are now as high as $6 billion.

“The bridge is probably a billion,” says the project manager. “The transit piece, similar.” Plus various extras; it all adds up.

The original Columbia River bridge was built in 1917, and a duplicate bridge was added in 1958.

Wait just a minute. The bridge has three lanes in each direction. Each of those lanes carry far more people than are likely to ride on any transit line. Yet the transit line is expected to cost as much as the bridge?

A Million Here A Billion There Real Money Song

Not only that, but the planners appear to be dead-set against expanding roadway capacities. Planners prepared twelve preliminary alternatives, only two of which included expanded bridge capacities for cars.

Now they have narrowed the selection to three alternatives, none of which expand the roadways. Instead, the recommended alternatives are: do nothing, blow a huge amount of money on bus-rapid transit, and blow even more money on light rail. 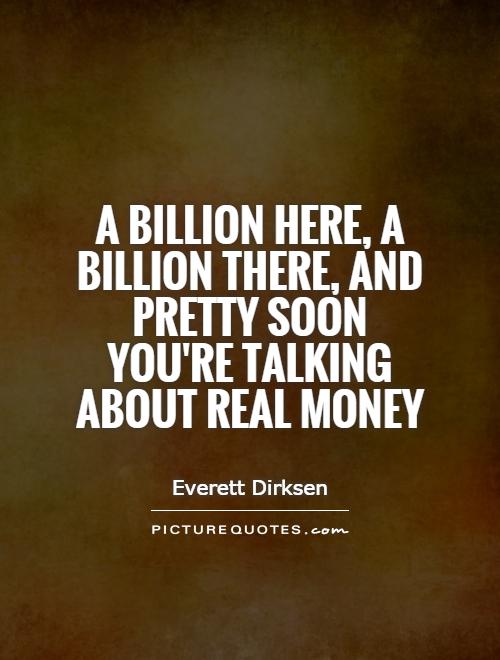 A billion here, a billion there, pretty soon, you're talking real money. Although often quoted, it seems Dirksen never actually said this. The Dirksen Congressional Research Center made an extensive search when fully 25% of enquiries to them were about the quotation.

A straight-line projection of traffic growth indicates that demand for both crossings may be close to 400,000 vehicles a day by 2025. That’s more than 40 percent above current traffic levels. Straight-line projections are pretty crude, but considering that the region’s population is expected to continue growing at historic rates, this probably isn’t very far off.

However, congestion could temper this use. Considering daily peaks and troughs, the 22,000 cars per lane on the I-5 bridge is pretty close to the limit for a freeway. According to Highway Statistics 2005, table HM72, the most carried by any urban freeway system is a little more than 25,000 vehicle miles per lane mile.

Rush-hour congestion leads people to leave earlier or later than they would prefer in order to avoid that congestion. This leads to a broadening of the peaks in traffic flows. This is visible in the chart below, which shows hourly flows across the I-5 bridge. (Click on the chart and scroll down to see how peaks have changed since 1983.)

By comparison, the peaks in traffic on the I-205 bridge are still sharp, indicating that congestion is not yet a serious problem on this bridge.

This shows that the maximum practical capacity of the two bridges is not much more than about 310,000 vehicles per day — and that will be accompanied by a lot more congestion that is experienced today. If demand really reaches 400,000 vehicles in 2025 (which isn’t that far away), some 80,000 to 90,000 of those trips are going to go somewhere else. This could mean more job growth in Vancouver, less in Portland. Or it could mean more job growth in Boise, Billings, or other less congested cities.

The problem with congestion is actually pretty simple. Freeway lanes can supposedly move about 2,200 cars per hour, though it is probably somewhat higher if drivers dare to drive closer together. But this is at about 40 to 50 miles per hour. If traffic slows for any reason, the capacity rapidly declines. Let’s say traffic slows so that the capacity falls below 1,500 cars per hour. Then traffic will be stop-and-go, bumper-to-bumper, until actual traffic levels fall below 1,500. Since this can take hours, any brief traffic slowdown can result in lengthy delays.

One solution to this problem is to make sure that traffic flows never exceed some lower number, say 1,800 vehicles per hour, that is less vulnerable to slowdowns. That is partly what ramp metering is about. But the better way is congestion tolling: just vary the tolls by traffic levels to make sure traffic never exceeds the target volume.

Americans once resisted tolls but now appear to accept them as a solution to congestion. However, they (or at least the politicians they elect) still resist tolling lanes that have historically been free. So Robert Poole and others have suggested that we build

A Million Here A Billion There Real Money In The World

Columbia River crossing planners did not seriously consider the idea of adding new tolled lanes to supplement existing untolled lanes. Instead, they are more interested in building a light-rail bridge across the river, a dream of Portland planners for years. Planners are certainly dreaming today if they think they can divert much of I-5’s traffic to bus or light rail.

Rail advocates love to compare rail capacities with actual highway volumes, but that is comparing apples to oranges. If a freeway lane carried 1,800 vehicles per hour 24 hours a day with 1.6 people per vehicle, it would move nearly 70,000 passenger miles per day. Considering peaks and troughs in flows, we have seen that actual uses max out at around 40,000 passenger miles a day. In the same way, rail lines have peaks and troughs in flows — most do not even operate 24 hours a day, and during the hours they operate, they only come close to capacity a few hours of the day.

Boston has the nation’s most heavily used light-rail system. The 2005 National Transit Database reports that average weekday traffic on this system was less than 12,000 passenger miles per directional-route mile — that is, per mile of track in a double-track line — each day. That is maybe a third of a typical urban freeway lane, and only a quarter of the heavily used lanes over the Columbia River.

A mile of track occupies roughly the same space as a freeway lane, so freeways are a more efficient use of land than light-rail transit. The only rail lines in the U.S. that are more efficient than freeways are New York City subways. Even accepting the idea that a lot of Vancouver commuters will be tempted to use a light-rail line, it is very unlikely that this line will do much better than Boston’s system, much less carry as many as a freeway lane.

So Portland is proposing to spend a billion dollars replacing the bridges with new freeway bridges of no greater capacity than today. These I-5 bridges will continue to carry at least 200,000 people across them per day (approximately 130,000 vehicles times 1.6), with demand for both crossings expected to grow by nearly 200,000 more in the next twenty years.

To accommodate this demand, Portland wants to spend another billion dollars building a light-rail line that might possibly carry about 20,000 people per day, or only about 10 percent of the projected growth in traffic. This is an absurd waste of resources, especially considering that light-rail fares won’t even cover the operating costs, and will cover zero percent of the capital costs, of the rail line and bridges.

It would make a lot more sense to either build new highway bridges with greater capacities or build a third highway crossing somewhere. The new capacity, or new bridges, could be tolled to insure that it never gets congested. These tolls would help cover the costs, and probably could cover the entire cost of the new bridges if all lanes were tolled.

The good news is that the Federal Highway Administration is openly questioning Portland’s anti-highway transportation planning. The Columbia River crossing is a test case. If Portland refuses to add new highway capacity, the federal government should deny interstate highway funds to the region.

Unless Portland’s policies change, if you plan to travel between Seattle and California anytime in the next fifty years, I strongly advise you to fly.